My pumpkin carving skills are limited. Especially since I hate the smell of pumpkin and usually use markers instead. :)

This guy's skills are slightly superior. Check out these samples...

For lots more check out The Pumpkin Gutter site. How are your pumpkin carving skills?

Hope you all have a Halloween weekend - watch out for those goblins!
P.S. Are you ready for NaNo?
Posted by Jemi Fraser at 9:39 AM 58 comments:

Hi! I'm over at From the Write Angle today talking about NaNo. I love National Novel Writing Month, (NaNoWriMo or NaNo for short). Not sure if I'm Nano-ing or not this year (yes, it's a verb!) - what about you? Any good NaNo stories to share?
Please pop on over to discuss how writing a 50k novel in 30 days is/isn't nuts!
I've turned off comments in the hope you'll visit me there! Thanks :)
Posted by Jemi Fraser at 7:00 AM

Email ThisBlogThis!Share to TwitterShare to FacebookShare to Pinterest
Labels: From the Write Angle, NaNo

﻿
Okay, so the writer in me wants to gently remind the Babe that people are 'who' and things are 'that', but I sure agree with the sentiment. There has been lots and lots and lots of great news in the bloggy-verse lately - and it's so exciting to celebrate success!!!

It always gives me hope. I'm on the right road. I'm heading in the right direction. Sure, at times it seems I'm moving more slowly than an arthritic snail, but I'm moving! I've seen a lot of sad faces in the bloggy-verse lately too. I hope these people see the hope and joy these successes bring.

Success is contagious - I say, bring it on! 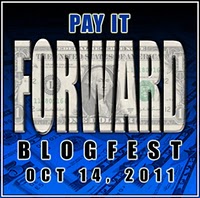 Matthew MacNish & Alex J Cavanaugh have brewed up another blogfest!﻿ In this one, we`re to choose 3 blogs we think others will enjoy, but who may fly under the radar. SO HARD!!!!
I have so many great blog friends - it`s pretty impossible to select just 3. But, them`s the rules, so...
Terry Lynn Johnson - Terry`s MG adventure Dogsled Dreams was THE favourite book in my classroom last year. They loved Rebecca and her dream to run her dogs in a dogsled race. It`s a fabulous story. As an added bonus, Terry is a true outdoor adventurer herself. She kayaks and canoes all over the place and has had some hysterical adventures!
Riley Redgate over at In the Jungle - Riley`s a young aspiring author and is having a blast with her blog. I originally met Riley over at Agent Query Connect. She`s very talented and her sense of humour is quick and often surprising. You`ll love her spirit!
Mindy McGinnis over at Writer, Writer, Pants on Fire! - Mindy - known over at Agent Query Connect as BBC (Big Black Cat) has a fantastic blog. She has several series she runs with some rather unusual names. SAT (Successful Author Talk), BOA (Bloggers of Awesome) & SHIT (Submission Hell - It`s True). Yup - you can tell you`re going to like Mindy already, can`t you? :)
So, there you have it! 3 of the many fabulous bloggers I adore! Hope you have fun visiting! :)
Posted by Jemi Fraser at 7:00 AM 76 comments:

Shannon Whitney Messenger created Marvelous Middle Grade Mondays to celebrate some fabulous MG books. This week I've decided to play along! :) Check out Shannon's place to see who else is playing. 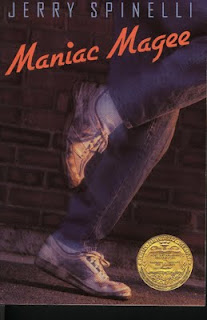 This is a fabulous book! On the surface its a light-hearted book about a boy who's trying to find his place. On deeper levels it's about so much more: racism, kindness, friendship, courage, risk-taking, love, the power of books, and the importance of education.

Spinelli is a master at making kids laugh. The situations Maniac gets into are hilarious and daring and plain ol' fun. Maniac is a great kid who wants an address and a family to go with it. He copes with all the traumas and disasters of his life by running. When he runs into a town firmly divided into black and white, he wants to stay. Wants to belong. He doesn't 'see' the colours, doesn't understand the divisions and that helps everyone around him do the same.

My students always love this book when I read it aloud. It's full of fun and adventure. And they LOVE the messages the story contains. We have tons of conversations and they're very thankful that our world doesn't have problems like racism anymore. And yes, I teach in a school with kids from many different cultures! Don't you just love kids??? :)

What other books do you know of that deal successfully with serious topics in a light-hearted manner?


It's our Thanksgiving weekend up here. Yay for turkey and stuffing and all the goodies that go along with it!

Being thankful's important. Here's a few of the things I'm thankful for today:
Happy weekend, Thanksgiving or otherwise, to everyone!!! Enjoy :)
Posted by Jemi Fraser at 9:14 PM 43 comments:

Email ThisBlogThis!Share to TwitterShare to FacebookShare to Pinterest
Labels: thanks

As most of you know, this has been Banned Books Week in the US. We Canadians have our Freedom to Read week in the new year. I love that the weeks are different - we get to celebrate twice!

I don't think it's any secret that I always let my own kids read widely when they were growing up and I encourage my students to do the same. I've never had a student read beyond his/her emotional yet. They always put down those books, call them 'boring' and choose something at their level. Strong readers will encounter mature topics earlier than other readers, but I've never found one not able to handle it.

I like skimming the lists to see how many are in my classroom. Kinda fun! Here's a Wikipedia List of the top 100 most commonly banned books. I have around 40 from this list in my MG class.

RL Stine's Goosebump series always makes these lists. They are 'horror' books - but they're usually more comedy than real suspense. One year I taught a girl in Grade 6 who had never read a book on her own. Too hard. I read one of the Goosebumps books into a tape recorder and she read/listened to it via headphones during our silent reading time. She asked for me another. And another. I couldn't keep up. So she told me she'd go ahead and try one on her own. She read two on her own that year.

I had her again in Grade 7. She read 17 more Goosebumps books that year. And then she tried the Fear Street series (tougher reading level). Then she moved on to more.

She came back to visit me years later and told me those books saved her. They opened her to the world of books and they helped her cope with a less than loving home life. She finished high school and college and was working towards owning her own business last I saw her.

She couldn't read more than a couple of dozen words at the beginning of Grade 6.

What's your favourite banned book?
Posted by Jemi Fraser at 8:24 AM 59 comments: