I'm not sure I'm even used to saying 2021, but here we are in December and looking forward to 2022 in another blink of the eye.

Here's to a year filled with peace and love and joy.

Here's to a year where no one is hungry or alone or afraid.

Here's to a year where we show our best selves.

Here's to a year where we find the best in others.

Here's to a year where everyone believes in science, equality, and respect.

Here's to a year where the world becomes a better, safer place for all.

Wishing you and yours all the very best for the Christmas/holiday season and all things wonderful for 2022!! 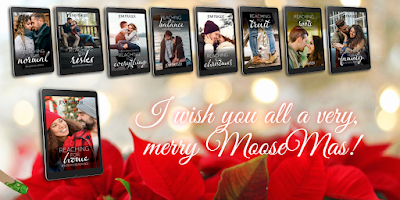 Have yourself a Merry MooseMas!

“You have the cutest baby ever. He should be in those commercials. They could sell anything using that face.”

Cindy and Tom smiled at each other. It seemed they weren’t just proud parents with a huge slice of bias. Their baby boy truly was adorable. Everyone said so.

Little Tommy’s pout warned of stormy tears as Cindy stood in the checkout line. Her beautiful boy stared up at her from the grocery cart, those blue eyes shining. Cheeks rosy.

“You have such a handsome son. You’re a lucky mom.”

Tommy smiled at the cashier, and the woman smiled back.

As he charmed the lady, Cindy reached out and added a candy bar to her order.

Tom looked at the red shirt he’d picked up for his son and then to the blue on the rack. “I thought you’d like the dinosaurs on this one. You’d rather have the blue?”

Tom laughed, ruffled his son’s curls, and changed out red for blue.

Tommy held the truck behind his back. “It’s mine.”

“Now, boys. No fighting. Tommy will have the first turn, you can have it next, Kev.”

“Tommy has been struggling to keep his attention on his studies this term.”

Cindy and Tom exchanged a look. “How can we help?”

The teacher smiled. “Well, if you could keep the girls away from him, that would probably help.”

Everyone chuckled. “The girls are always calling the house as well. One even dropped off cookies for him on the weekend.”

“He’s a good-looking kid. There’s probably more of that in his future.”

Tommy checked his hair in the mirror he’d installed in his room. The bathroom had better lighting, but his parents were always complaining he spent too long getting ready for things.

They didn’t get it. It was important to always look his best.

Tommy gave his best smile to his grandparents. They liked to see him smile.

He even let them pinch his cheeks.

They always slipped him money when they visited.

“I prefer to be called Thomas.”

“I will no longer answer to that name.”

“My eyes are halfway through a blink. I need you to retake the photo.”

The clerk frowned at the picture and pointed to the sign that stated unless eyes were fully closed, the picture couldn’t be retaken.

Thomas smiled the way he’d perfected in the mirror. The smile that gave him the maximum results.

The clerk smiled back and the second picture was perfect.

Thomas checked his appearance one last time before heading out to pick up the girl. He’d told her to leave her hair down. When she wore it that way, she was the prettiest girl in the school.

He’d told her to choose a blue dress so they would match. His shirt and tie were the perfect shades. They would make a striking couple.

Their pictures would be the best.

Thomas selected his courses carefully. All it had taken was a bit of research to find the perfect professors.

It was an easy thing to cruise the internet, find their bios, and check out their pictures.

Adults were easy to figure out. He knew which ones he could work with and which ones would be more difficult. His degree would be a piece of the proverbial cake.

Thomas looked out the windows of his penthouse.

Christmas lights were lit across the city. Cindy and Tom had wanted him to cross the state to visit with them. Spend a day traveling to put up with annoying small talk and overcooked turkey.

He’d rather be exactly where he was. He had a dozen invitations but had yet decided which would be most beneficial and least annoying. He might stay in and enjoy his own company. It was far better than idiotic small talk.

Thomas lifted his wine glass and toasted his reflection in the window.

Tagline: Bringing up Tommy, the tale of a narcissist.

The above is part of the WEP Challenge for December. I really struggled with a story for this prompt! It's always interesting to see which prompts bring stories quickly to mind and which have me really reaching for an idea!

I hope you join in the Challenge for the month! Because it's a busy season for many around the world, we've extended the posting dates from December 1st to the 15th. That will give everyone time to write, post, and enjoy the other stories.

I'm looking forward to seeing how others interpreted the prompt!

We've decided on the prompts for next year and I think you're going to love them! 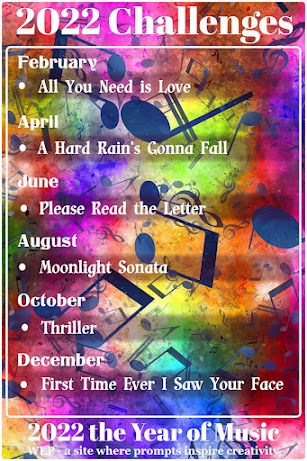 December 1 question - In your writing, what stresses you the most? What delights you?

How about you? Whether you're a reader or a writer, what stresses you out about books? What delights you? Any of yours the same as mine?
***
WEP News!
Over at the WEP Challenge Blog, we're ready for the December Challenge - Narcissus! 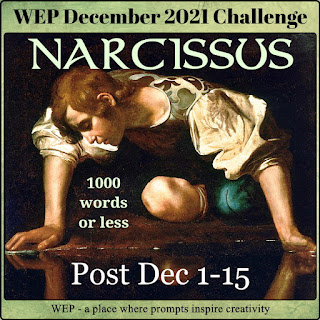 Because this is a busy time of year, we'll be allowing stories to be posted anytime from today to the 15th of December! Looking forward to all the stories produced by this prompt. My story will be in up in the next day or two.
We're also announcing the themes for the 2022 Challenges (HOW is it almost 2022?????).
Check it all out here!