Please welcome Patricia Josephine back to the blog today!

The challenge of writing short fiction.

You may think writing a 200 word story isn’t that challenging, but it couldn’t be farther from the truth. Some writers may actually say it’s harder than writing a full-length novel, and I know a few who don’t write shorter fiction because they can’t wrap their brains around it. Their muse only works in long form.

Writing short fiction is different from a novel. With novels, you have an unlimited number of words you can use to paint a picture for the reader. Short fiction you have restrictions on word count. You may only have 1000 words. You can even have as little as 50. When you have that limit, you are forced to choose more carefully. Your strokes have to be broader instead of going into minute details as you can with a novel.

The way I approach short fiction is similar to my novels. I just start writing. I figure out the story as I go and when I get to the end, I edit. I edit until the story is at the word limit I’ve imposed. That’s done by cutting descriptive words. The sentence doesn’t need the color of someone’s shirt for example. Thoughts the character has might get axed as well. If it doesn’t serve the basic story I want to tell, it can go.

Sometimes that doesn’t always work. Sometimes the story I’m trying to tell needs to be longer. When that happens, I stop worrying about word count and let it end as a novella or novel. I have a zombie apocalypse story I hope to release in the future that I initially intended to be 100 words. It ended at over 10,000! 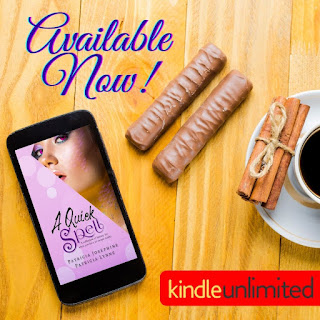 Writing short fiction is a great exercise. It makes you think about word choices and their importance to the story. I encourage anyone who enjoys writing to give it a shot.

We are bewitched by what we can't see.

Conjure delight with a fantastical collection of tales. Each story is told in exactly 200 words and designed to delight your imagination no matter how busy your day is. 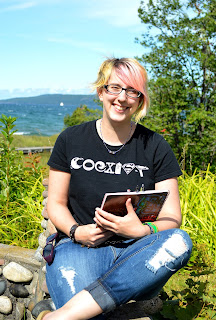 Patricia Josephine is a writer of Urban Fantasy and Sci-Fi Romance books. She actually never set out to become a writer, and in fact, she was more interested in art and band in high school and college. Her dreams were of becoming an artist like Picasso. On a whim, she wrote down a story bouncing in her head for fun. That was the start of her writing journey, and she hasn't regretted a moment. When she's not writing, she's watching Doctor Who or reading about serial killers. She's an avid knitter. One can never have too much yarn. She writes Young Adult Paranormal, Science Fiction, and Fantasy under the name Patricia Lynne.

Patricia lives with her husband in Michigan, hopes one day to have what will resemble a small petting zoo, and has a fondness for dying her hair the colors of the rainbow.

Thanks, Patricia! I didn't start writing flash fiction until I came across the WEP challenges. I really enjoy the shorts now! You're so right that it's a big challenge to write a good small story!

The May 5th question is:  Has any of your readers ever responded to your writing in a way that you didn't expect? If so, did it surprise you?

Reaching For Balance is the 4th story in the Bloo Moose series, but it brought me a great big first! 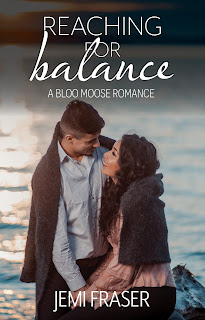 From a complete stranger.

Who loved my book.

After reading Balance, this person had gone back and read the first three books in the series and has read all the others as well.

In the email, she called me her new favourite author.

I think I read the email 5 times before I believed it. When I started publishing last year, I didn't really know what to expect in terms of sales and reviews (still don't). It's a big scary world out there with a whole lot of twists and turns.

I honestly never expected to get an email from someone who called herself a fan.

Getting that email surprised me in such a good way. It's one I use on those tougher days to bolster myself and remember that good things comes in unexpected ways and at unexpected times.

How about you? Have you ever received an email that made your day? What was the last unexpected good news you received?

The newest IWSG anthology is out and about today! These anthologies will also be special for me. My first published piece of writing was in Tick Tock: A Stitch In Crime. I met so many great people through the anthology and learned a ton about the process and working with a small press publisher. An excellent experience and a great welcome into the publishing world.

I'm thrilled to know a few of the authors in this newest anthology. Can't wait to read their stories and to meet some new author friends as well.

To celebrate a SF anthology I thought it might be fun to find out what fictional worlds the authors like best. 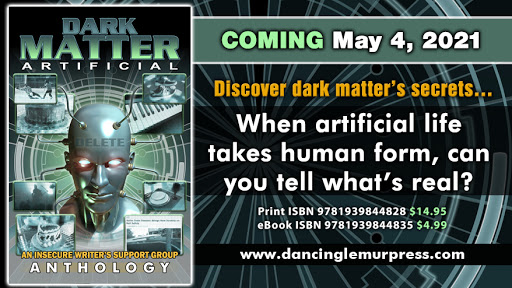 The fictional world that intrigues me most is definitely Star Wars. I suspect it's because I've been fascinated by it since I was knee-high to an Ewok, but it definitely pushes all the right buttons for me. No other world has inspired me to create so many of my own stories, games, crappy fanfiction, or fuelled so many arguments. No other intellectual property can instill such joy and rage in me.

Besides that of Middle-earth? :p
I'm fascinated by Middle Grade and Young Adult books set in 19th and early 20th century Canada. To the extent that the first time I visited Toronto, I expected it to still look like it had in the 1930s, in the books by Bernice Thurman Hunter!

My favorite fictional world is the one where I grew up, a fantasy land that emerged from the very prosaic soil of Queens, New York. My neighborhood was Rego Park, which was created in the 1920s by an enterprising real-estate company that took the name Rego from the slogan, "A REal GOod place to live." The developers carved up the farmland (yes, there were still farms in NYC in the 1920s) into plots that were strategically situated along Queens Boulevard and the Long Island Railroad. By the 1960s the neighborhood was a cluttered mishmash of attached houses and 15-story apartment buildings, drab red-brick piles graced with idyllic names such as Park City Estates, Saxon Hall, and Anita Terrace. But in my imagination, each housing complex became a fortress in a war-torn medieval land. As I wandered down the commonplace streets I imagined that I was embroiled in the bitter feudal battles, and when I looked up I saw knights and archers standing on every rooftop. In short, Rego Park became my Middle Earth, my Westeros. And now when I visit my old neighborhood, I see the fantasy more clearly than what's really there.

I would say it is the universe Wen Spencer has created in her Tinker series. That universe has immortal elves in it, and magic, and quantum physics too. The author postulates that there are several parallel worlds that almost mirror each other in terms of continents, climate, and such, except for one huge difference. Some of those worlds, like Elfhome, the planet of the elves, have oodles of magic. Others, like Earth, don’t have magic at all. There is even a possibility to travel between those worlds, but the presence or absence of magic makes for all sorts of problems for the author’s characters. Plus, people are the same everywhere, magic or no magic. Some are good, some are evil, and most are in-between, struggling with their everyday lives.

This world intrigued me so much that I wrote three fan fiction novelettes set in it. All three have original characters – I didn’t use Spencer’s characters. All three are posted on my wattpad account [https://www.wattpad.com/user/olga_godim].

I tend to lean toward worlds that are full of magic and nature. As an avid gamer (before I had a baby), the Kingdom of Hyrule in The Legend of Zelda series is particularly interesting because there are different “worlds” within the world—levels made entirely of water or sand, inside a tree or inside a volcano. This also made me think about the fictional nations in the animated series, Avatar: The Last Airbender. There’s Water Tribes, the Fire Nation, the Earth Kingdom, and Air Nomads. People within this world can “bend” the elements of water, fire, earth, and air in order to travel, heal, fight, defend, and more. It’s like magic, but feels so personal.

The fictional world that intrigues me the most are books and movies with inspiring romances with happy endings--this world has too much heartache to not desire a bit of joy!

I'm a fan of all fictional worlds, and each has its own unique way of storytelling, but I'm always going to go back to books as my favorite source. There is richness, emotion and detail in great written works that you can't find anywhere else.

I love to escape reality, so sci-fi and fantasy are my favorite fictional worlds. Anything from epic fantasies like The Hobbit, Harry Potter, and my own Beast World to sci-fantasy Star Wars/the Mandalorian, near future sci-fi Ready Player One, and YA sci-fi Hunger Games. Imagination rules!

When I was a boy, I dreamed of creating my own fictional world someday. I wanted to create one with the imagination of Michael Ende's Fantastica, the depth and attention to detail of Tolkien's Middle-Earth, and the cheerful comfort of C.S. Lewis' Narnia. (The "Harry Potter" books weren't around back then, but if they had been, I would have added a liberal dash of J.K. Rowling's tongue-in-cheek humor.)

Fully developed universes with multiple stories intrigue me the most. A few examples:  Terry Pratchett’s Discworld, the Ekumen systems in Ursula K LeGuin’s stories, and even TV worlds like Once Upon a Time. I love how they weave pieces of our own history into their fiction worlds and somehow make them new and breathtaking. 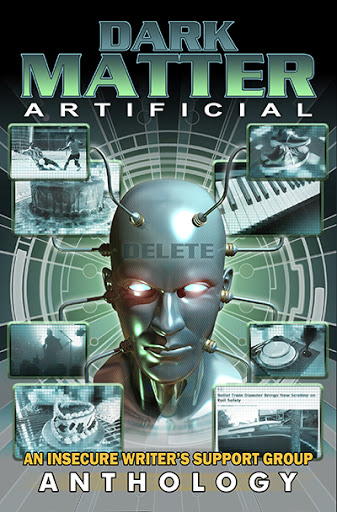 What is an AI’s true role? Will bumbling siblings find their way home from deep space? Dark matter is judging us—are we worthy of existence? Would you step through a portal into another reality? Can the discoverer of dark matter uncover its secrets?

Hand-picked by a panel of agents, authors, and editors, these ten tales will take readers on a journey across time and space. Prepare for ignition!

So many great answers and incredible fictional worlds! My TBR list just got longer!

I love many of the worlds above and I'd also have to include Anne McCaffrey's PERN world as one of my favourites.

And my very own Bloo Moose, Vermont, because like Elizabeth said, the world needs more happy endings and I think Bloo Moose would be a great place to live!

How about you? Which fictional world is your favourite?