a year that took
3 from our little family

For that's where you make
magic
Posted by Jemi Fraser at 6:00 AM 14 comments:

Dylan wiped his hands on his new jeans. Maybe he should change into more comfortable ones. Or dress slacks. A tie. He should wear a tie.
No. Too stuffy and he’d never be able to swallow. Or breathe.
Okay. No tie. Stick with the jeans.
Deep breath. If he couldn’t get it together, he’d sweat right through the shirt he'd chosen.
Calm.
His sister was all about yoga and meditation. She’d know how to set the stage and not panic. She’d know how he should dress too. But if he called her for advice, he’d never hear the end of it.
He was doing this solo.
And he was doing it right.
The timer on his cell beeped. Ten minutes. Only ten minutes. Screw calm, he had things to do.
A peek in the oven showed the lasagna bubbling away. Another few minutes and he’d pull it out to rest. Salad was prepped and ready to toss. Garlic bread set to go in as the pasta came out.
He’d set the dining nook and hidden the little box behind the plants on the ledge so he could pull it out at the right time.
At the thought, another wave of sweat rolled down his forehead. He used a tea towel to wipe it away then looked in horror at it. He hadn’t done laundry. Were there any clean ones left?
With a sigh, Dylan swiped the ruined cloth over his neck and wished it wouldn’t be totally disgusting to use it on his arm pits as well.
He’d burned three of his ten minutes. Dylan grabbed the barbecue lighter from the drawer and headed back to the dining nook. It took three tries but he got it working and he slowly walked around the room, lighting the candles he’d clustered. Apparently the effect was better when candles were set in odd numbers, so he had groups of three and five. Seven had looked more like a pyre than a romantic setting, so he’d scrapped that.
The buzzer nearly had him jumping out of his skin. With a sigh at his nerves, Dylan tossed the tea towel and the lighter, then moved to the door to press the button. “H-Hello.” He thunked his head against the wall over the stammer. He couldn’t be lame. Not tonight.
“It’s me.”
Dylan nodded, then groaned and pressed the buzzer. “Come on up.”
“See you in a minute.” The smile reached through the speaker, bringing one of his own. Everything about that voice soothed him right down to his soul.
Dylan unlocked the apartment door. He started back to the kitchen then decided he’d rather meet the elevator than check on the pasta one more time. He walked down the hall and leaned back against the wall to wait. After a moment, he shoved off, not wanting to look too casual. He straightened, then loosened his knees. Not uptight either. Hands in pockets. Yeah. That would work.
He was driving himself way past crazy.
The elevator dinged and in only an eternity the doors swooshed open. “Hey you.”
“Hey yourself, handsome.”
The kiss soothed any remaining nerves. This was right. All the way right.
“Is something burning?”
Dylan whipped around to see smoke snaking out of his apartment just as a smoke alarm split the night.
They raced to the door but the smoke was thicker and a peek showed flames from where he’d tossed the tea towel too close to one group of candles. Talk about a pyre. The sprinkler system kicked on but the flames didn’t seem to care.
When he started into the room, Marc tapped his arm. “Be careful. I’ll call 911.”
Dylan grabbed the fire extinguisher from under the sink and aimed it at the flames. It didn’t take long to kill the fire, but the mess was unbelievable. His shoulders sagged and he swore. “Tonight was supposed to be… I planned everything… Damn it, I was going to propose!” Well, that wasn’t the romantic speech he’d planned.
Marc’s eyes widened as he finished the call and shoved his phone in his pocket then joined Dylan while neighbours gathered in the hallway.
A small smile kicked up the corner of Marc’s mouth. Without breaking eye contact, he reached into his jacket pocket and pulled out a small box. “In a few decades, it’ll make a fabulous story to tell the grandkids.”

This story is part of the WEP challenge. Hope you'll check out the rest of the entries for the twin themes of Ribbons & Candles! There's still time to sign up as entries don't close until December 20th! 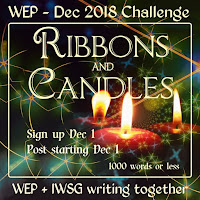 Thanks so much to the WEP team for the Comment award! Check out the fabulous winning story by Michelle Wallace and the other winners at this post! This is a fun flash fiction challenge and a great community to join. Check it out! 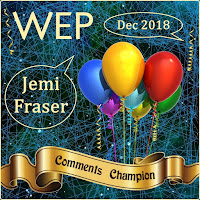 December 5th Question: What are five objects we'd find in your writing space?

How about you - what fun things are in your writing (or reading!) space?