Today is the Catch Fire Blog Party, celebrating the release of CassaFire by Alex J. Cavanaugh! The goal is to help CassaFire “catch fire” on the best seller charts and achieve the success of the first book, CassaStar. There’s also a special package of prizes being given away at the author’s blog (copies of CassaFire, CassaStar, tote bag, mug, and bookmarks) as well as book giveaways during his two-week blog tour. See Alex’s site for details.

CassaStar was just the beginning… The Vindicarn War is a distant memory and Byron’s days of piloting Cosbolt fighters are over. He has kept the promise he made to his fallen mentor and friend - to probe space on an exploration vessel. Shuttle work is dull, but it’s a free and solitary existence. The senior officer is content with his life aboard the Rennather. The detection of alien ruins sends the exploration ship to the distant planet of Tgren. If their scientists can decipher the language, they can unlock the secrets of this device. Is it a key to the Tgren’s civilization or a weapon of unimaginable power? Tensions mount as their new allies are suspicious of the Cassan’s technology and strange mental abilities.   To complicate matters, the Tgrens are showing signs of mental powers themselves; the strongest of which belongs to a pilot named Athee, a woman whose skills rival Byron’s unique abilities. Forced to train her mind and further develop her flying aptitude, he finds his patience strained. Add a reluctant friendship with a young scientist, and he feels invaded on every level. All Byron wanted was his privacy…

CassaFire is the sequel to Cavanaugh’s first book, CassaStar, an Amazon Top Ten Best Seller:“…calls to mind the youthful focus of Robert Heinlein’s early military sf, as well as the excitement of space opera epitomized by the many Star Wars novels. Fast-paced military action and a youthful protagonist make this a good choice for both young adult and adult fans of space wars.” - Library Journal

Alex is a HUGE supporter of everyone in the bloggyverse - I hope you're willing to help him out too!

PS - if you didn't have a chance to drop by yesterday, I hope you'll pop on over to From the Write Angle where I'm talking about Freedom to Read!
Posted by Jemi Fraser at 1:00 AM 38 comments:

It's Freedom to Read week here in Canada. I'm over at From the Write Angle today talking about it - hope you'll drop on over and join in the discussion! :)

Email ThisBlogThis!Share to TwitterShare to FacebookShare to Pinterest
Labels: banned book week, Freedom to Read, From the Write Angle

Yay!!! I'm back - sort of. My computer has returned from Techie Repair Land safe and sound - with a shiny new cord & a fixed internal somethin-or-other - and they even replaced the 0 key in the number key pad. It also came with a shiny new battery, but the battery and the computer refuse to talk to each other. I've tried several things & now my Techie Guys are ordering me another shiny new battery. If that doesn't work, I'll have to lose the computer for a while ... again. *sigh* But, at least it's all still under that extended warranty (which has paid for itself 3 or 4 times over by now).

Not having a battery is driving me a little nuts too. I hadn't realized how often I moved with the laptop until now. I change places a lot - either following or avoiding family activities and real life. I keep unplugging the laptop and forgetting the battery isn't there - so I'm stressing the poor thing out a little bit. Hopefully I get better - quick!

I love my iPod touch, but it's really, really HARD to keep up on it. So, my apologies for missing all your posts - and I think I'm going to use that scary "Mark All as Read" button on Google Reader. There's somewhere close to a bazillion posts (okay, really only 8000) I've missed. 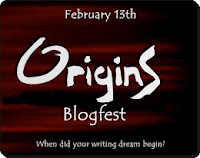 DL's done it again - another great idea! You can find all the links for the Origins blogfest over at DL's website.

So, how did I become a writer?

I've always loved stories. I read voraciously at an early age (still do) - & I remember visiting the library every 3 weeks with my two bags loaded with books. So many great series - so many tales out there. But I didn't write any of my own then.

We only had 2 creative writing assignments in grade school. We spent most of our time diagramming sentences - yuck! One of our 2 assignments was to write a page beginning with ____ is a ____ sport.

I chose tennis. I was on the tennis team at the time. I was also the shortest & tiniest kid in my class and on the team. I might have had a decent serve and pretty darn good backhand, but I couldn't compete against these kids who outweighed me - sometimes doubled my size. So, I wrote about the year on the tennis team. I started off with: Tennis is an exciting and terrifying sport. I finished it off with something like: So is tennis exciting or terrifying? I'll let you decide.

I got marked down for not coming to a conclusion. *sigh* But I liked that story. Even after it was long gone, I remembered the fun I had writing it. I didn't put pen to paper for years and years after that, but I kept the stories going in my head. Decades later, I decided to try writing again. And you know what? Those adjectives I used to describe tennis? They work fine when describing writing too.

Do you remember any of your grade school stories?

Don't forget to check out DL's for other participants. My computer is still in Repair Land, so I probably won't be able to visit many of your blogs - but I'll catch up once I get it back!
Posted by Jemi Fraser at 1:00 AM 79 comments:

As you probably know, I've had a few issues with my computer. The cord I ordered online came in. Yay! Well, momentary Yay!

I plugged it in, turned it on and waited through the warm up drill. The little power icon showed it happily charging ... for about 2 minutes. Then it showed it running on battery power - which is limited and fading fast. I tried plugging it in again, tried the cord at various angles, ... Nothing. Nada. Zip.

Sadly, I trudged up to the store and talked to the techie guy, who said, "Hmmm." Never good. He's assuming there's something wrong inside the computer - but one of the joys of living in small city Northern Ontario is that there are no local techie people for these companies. So, the laptop has been packaged up and sent on its merry way. Hopefully the guys in Techie Land are kind and quick. The laptop is still under the extended warranty, so that's a plus, but it could be a month before it finds its way back to me. *sigh*

I'm on a borrowed computer for a couple of hours, so I'll try to visit some of your blogs, but I'm afraid I'm down and out for a while yet.

Keep track of all your good news to let me know when I come back!
Posted by Jemi Fraser at 12:00 PM 56 comments: