Tara Tyler is a great Twitter friend and the host of the weekly #WedWrant chat for writers. (Wednesdays at 7:30 pm EST if you're interested in joining us!)

Taking Back Beast World, Phase 2. Disney/Pixar's Onward comes out Mar 6 with a setting eerily close to BEAST WORLD, and it's time to speak out again—in a positive way! And in coordination with BROKEN BRANCH FALLS just republished and CRADLE ROCK soon to follow.

Tara Tyler has some big ideas with awesome friends from the fantastic writing community backing her up. She's scheduled a month and a half of posts, interviews, reviews, and social send-outs. It's sure to be a Beastly Blast! Here's the schedule:


Hope you can stop by!

Goblins and Ogres and Pixies, Oh my!
This is a fabulous MG adventure with wonderful world-building that immerses you right into the story. Gabe, the main character, or should I say the main goblin, gets himself into trouble after a prank gone terribly wrong. That mistake starts Gabe on a series of adventures with companions from many of the other beasts populating his world.
Gabe and his friends don't agree with the adults who dictate who they should befriend and what activities they should enjoy. They're on a mission to change their world and they get a whole lot more than they bargained for.
The underlying theme of the story echoes the theme of many of our current young activists. We need change and we need to listen to our kids who often see the future more clearly than we do.
A fantastic story for all!

And the fun continues!!
This is an action-packed adventure story that keeps you turning the pages. The beast buddies from the 1st book are back and onto new adventures. When Ona, the ogress, gets lost on Spring Break, Gabe (goblin) and Rove (werewolf) head off to the rescue. What they find is a whole lot more than they expect - or want to believe. The adventure takes on a dangerous turn when the beasts meet mythology come to life.
This book should appeal to anyone in middle school or older. A fantastic read with heart!!

How about you? Do you enjoy fantasy books? Adventure? Anyone else ready to make friends with the beasts?
Posted by Jemi Fraser at 7:00 AM 20 comments:

“Careful. You must not damage any of it.”


Sopa controlled his response, careful not to let Maktin see how difficult it was to not react. “It is not my first job.”

Maktin paced behind him and Sopa worked to ignore the grumbles. The lead krako made him nervous. And being nervous led to mistakes. Mistakes led to being hungry and cold, two things he swore he’d never be again.

Ignoring Maktin became easier as he cleared more and more of the debris and his excitement grew.

This was different that anything he’d seen so far on the planet. The edges were smooth and straight, but beyond that, the object lifted and twisted in some kind of ornate pattern that repeated itself along the edges. Only along the edges.

As he cleared more debris it became apparent that the patterned shape was a frame of some sort. But for what? The inner texture was different. Softer. Flat.

Sopa angled his light and barely managed to keep in the gasp. He didn’t want Maktin rushing him, especially with such a special find. He didn’t even have a word for some of the colours on the item.

Blat after blat passed and Sopa continued his task, working until his lower extremities were numb from keeping his position. His uppers ached, but he kept them all moving, working to clear more and more of the wonderful object.

Eventually it was clear of the debris and Sopa straightened to pull it free.

When no one reacted behind him, he turned to find Maktin in a sleep cycle. Sopa must have been working for many blats.

But the object energized him. Bright with those colours he hadn’t seen along with the regular ones.

What beings had created such colours? The planet showed none of them, not that Sopa had seen. The air was smoky, the land devoid of anything alive. Had such colours once existed in this bleak place?

Sopa studied the item in front of him and wondered if it had a purpose or if it was a decorative piece. He rotated it to view it from all directions but couldn’t decide which orientation was up.

Sopa pressed along the edges and the various colours but didn’t get the item to react in any way. There was no indication it was to do anything other than be.

Decorative then. The first decorative find on the planet, proving that the beings had at least evolved to some level of sophistication.

Were some of the coloured shapes replicas of the planet’s one-time beings?

From the various orientations Sopa got different impressions. A landscape. Buildings. Beings. Nothing familiar and certainly nothing that resembled this planet.

But it was a clue. Perhaps a clue that would unlock the key to understanding the beings who had burned their planet and destroyed its atmosphere.

For long blats, Sopa allowed himself to appreciate the decorative item. Soon he would wake Maktin and they would record the treasure and search for more, but for now, he would simply enjoy.

This story is part of the WEP/IWSG Challenge. If you click on the link it will take you to a host of other stories using the prompt Cafe Terrace. Most of them will probably not involve aliens ... although that's just a guess.

Apparently my brain is still in SF land - even though I'm mostly a romance writer and this is the month of Valentine's Day. 😆

How about you? Did you join in the challenge? (There's still time to join in!) Thinking about it for next time? Any other SF fans out there?

(PS: If anyone has any interest in an ARC of my upcoming release, Dancing With Dementia, check out the previous post!)
Posted by Jemi Fraser at 8:42 AM 52 comments:

Dancing With Dementia has a release date!

About 2 months away … so cue the freak out! 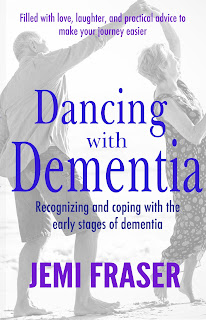 This book has been a labour of love for the last few years. The majority of the book is the story our journey. The collection of stories should make you laugh, sigh, shake your head, and blink back a few tears.

The latter part of the book includes lists for people who have someone with dementia in their lives. There are lists of early warning signs we’ve seen, tips to redirect and reassure those with dementia, ideas to ease communication, tips on how to make the move to a nursing home or other living situation, and tips to take care of the caregiver.

Dementia is NOT an easy disease. It’s horrific and cruel. We’ve managed to keep our Mom mostly happy and content. She's still laughing, still dancing. We hope our story will help others who are in the first steps of this dance with Dementia.

If you are interested in an ARC, please let me know (in the comments, email, or sign up for the newsletter).

The wonderful Mason Canyon (MC Book Tours) is going to help me out by hosting a blog tour for the release. If you are interested, you can sign up HERE. 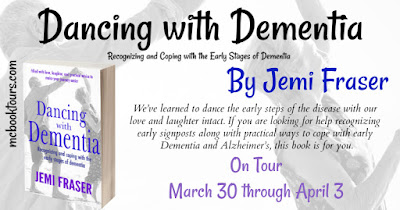 My website is now active.
I've set up another blog to discuss more things dementia related.
I also have a YouTube Channel devoted to Quick Tips based on ideas in the book.

The only links I have available at the moment are for Amazon. Here are .com and .ca links, but it should be available in all countries. The price is set at $0.99 (US) for preorders and the first couple of weeks after release. After that, the price will jump up.

Add it to your Goodreads shelf here!

Once other links for the books are ready, I'll let you know!

So, that's the news! If you know anyone who might benefit from the book or tips, I hope you'll let them know. Thanks!!

February 5 question - Has a single photo or work of art ever inspired a story? What was it and did you finish it?

Interesting question.
At first thought, my response would be no.
Then I remembered the upcoming WEP prompt and had to go with yes for that piece.

That triggered other thoughts.

I enjoy photography and take a lot of photos of people and our scenery here in gorgeous Northern Ontario. The vast majority of pictures I take are because something triggered an emotional response in me.

I'm a writer who isn't triggered by people or problems first. Instead, it's always the emotion that traps me into a story. That emotion spawns a character feeling that emotion and then the trouble that created it.

Many paintings and photos create those emotions in me, so they probably have triggered more stories and ideas than I realized!

How about you? Anyone else like photography? Anyone else get those gut reactions to images?
Posted by Jemi Fraser at 7:00 AM 48 comments: