Cyla might never have seen a chick, or even an egg, but now she knew why they’d worked so hard to get out of those shells.

This tiny room wasn’t much larger than her bunk, and it felt like it was shrinking. The walls were covered in controls she didn’t understand. Wasn’t allowed to understand.

The explosions had stopped, but Darra hadn’t answered his link.

She’d snuck out to explore when Etoile had shaken so hard, Cyla had been tossed through an open door into this room. Darra would be so annoyed. She wasn’t supposed to leave their room without him—ever—and now she was trapped.

Cyla stood up and pressed the rectangle closest to the door, but nothing happened. Where was Darra? Why wouldn’t he talk to her? How was she supposed to get out?

Darra had told her red meant danger, so she didn’t want to press those controls. Black or blue?

She tried her link again, but when Darra didn’t respond, she pressed the highest button she could reach beside the door. Symbols flashed on the screen, but she hadn’t been taught symbols yet. Too young. Too dangerous.

A siren shrieked and Cyla ducked to cover her head. The steady shriek changed to a pattern. Three long, three short, three long bursts. A pause then repeat. Something else she hadn’t learned.

Etoile shuddered, sending Cyla crashing into one wall and then another. And another.

Battling tears, she steadied her hands against the sides of the room and pushed to her feet. She had to get out. Find Darra.

While Etoile lurched, Cyla tried pushing button after button. The only response was symbols on the screen. The door remained locked. She pounded her fists on it, calling for help.

Another jolt sent her flying and she couldn’t stop the tears from flowing.

The shaking continued, but Cyla gained her feet again and used her fists to slam all the non-red buttons she could reach. Nothing.

More controls sat higher than her head but there was nothing to stand on. Those had to be the ones. Cyla jumped and managed the first one. More symbols.

Screaming her frustration, she jumped again and again, slamming her fists into the wall.

The familiar hiss of doors opening had her smiling through the tears, but the door remained closed in front of her. A higher-pitched siren joined the other, this one screeching in short, repeated bursts.

A frigid wind rushed in behind Cyla and she tried to turn even as the wind wrapped around her and yanked her with it. 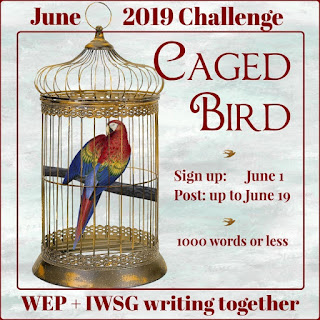 This story is part of the WEP/IWSG challenge. Check the link to find all the details and check out the other entries. It's fun to see how differently people interpret the challenge!

How about you? Any stories you're working on about being trapped? Anyone else feeling like a freed bird now that the nice weather has arrived?
Posted by Jemi Fraser at 7:00 AM 74 comments:

***
June 5 question: Of all the genres you read and write, which is your favorite to write in and why?

I love so many genres - both for reading and writing!

I've been immersed in the world of nonfiction recently getting ready to publish Dancing With Dementia. It holds a huge part of my heart because it deals with my family and how dementia has affected all of us.

Nonfiction is a different beast from fiction and it's had its own set of challenges and joys.

Because it's consumed my world for the past few years, it's definitely my current favourite genre. Writing a deeply emotional subject is obviously not easy, but writing it with the purpose of helping others makes it easier to do.

I'm looking for early readers for Dancing With Dementia. If you're interested, send me an email (jemifraser@gmail.com), let me know in the comments, or sign up for my newsletter over in the righthand sidebar of the blog. (The newsletter will be for all my writing, not only the nonfiction.) Thanks!

Once this book is out and about, and I start focusing on my romance stories again, I'm sure that genre will zoom back into my favourite spot!

How about you? Do you switch up your favourites depending what you're working on? Anyone interested in an early copy of Dancing With Dementia?
Posted by Jemi Fraser at 7:00 AM 65 comments: