Have you ever held onto a secret you've been dying to share, and then finally...you can? 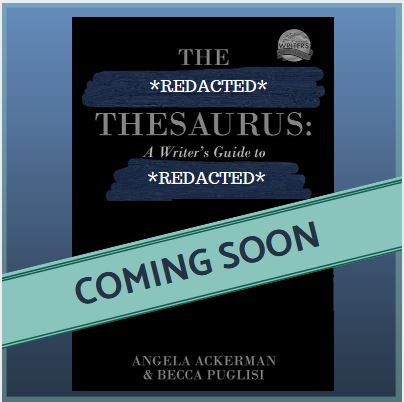 For the last few weeks I've been helping Angela and Becca at Writers Helping Writers keep a BIG secret...what the next book in their thesaurus series will be.

It might seem strange to not tell one's readers what book you're planning to release...unless you happen to write books on Show, Don't Tell like Angela and Becca do! They couldn't resist the opportunity to show, not tell, by waiting for the cover reveal. They even created a *REDACTED* cover for it, which you might have seen floating around.

The next book in the descriptive thesaurus series is
The Emotion Thesaurus Second Edition!

It's been 7 years since the original Emotion Thesaurus hit the shelves. Many writers have credited this unusual book with transforming their writing. This guide is packed with helpful lists of body language, thoughts, and visceral sensations for 75 different emotions, which makes it easier for writers to convey what characters feel.

Since 2012, many have asked the authors if they would add more emotions, so that's what Angela & Becca have done. This new edition has added 55 more emotions, bringing the total to 130.

There are other new additions to the book and in fact, it's almost doubled in size! I recommend checking out the full list of emotions (and some sample entries) HERE.

And more good news: this book is available for preorder!

You can find it on Amazon, Kobo, Apple Books (iTunes), and Indiebound.


Angela & Becca are giving away a free webinar recording of one of their popular workshops on Emotion, so head over if this is an area of struggle for you. It might really help!

And we’re revving up IWSG Day to make it more fun and interactive! Every month, we'll announce a question that members can answer in their IWSG Day post. These questions may prompt you to share advice, insight, a personal experience or story. Include your answer to the question in your IWSG post or let it inspire your post if you are struggling with something to say.
***
January 2 question - What are your favorite and least favorite questions people ask you about your writing?

This one is a bit tricky as I haven't told a lot of people in my Real Life that I write.
Being a romance writer and a teacher is a bit of a tricky combination so I've kept those parts of my life separate.

I do have a few Real Life Buddies who know. They tend to be great with their questions and mostly just ask, "How's your writing going?"

It's a good question, but a difficult one to explain to those who don't write. I tend to say I'm making progress, but am not quite ready to put my work out there. Yet.

My least favourite question is actually ANY question about my writing. Because I talk about it so rarely, I don't have answers ready. I'm not prepared and I tend to stumble and stammer. As I get closer to publishing my work, I know I'll have to practice!

How about you? How do you handle those tough questions thrown your way?
Posted by Jemi Fraser at 6:00 AM 50 comments: