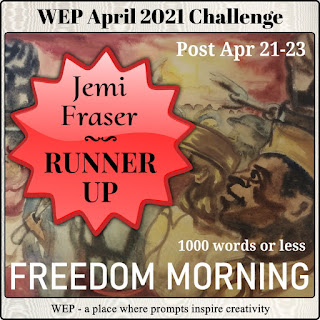 Thanks so much to the WEP team for selecting Jardin as the runner up this time around! Congrats to Toi for her powerful entry and the emotions she evoked!
Jardin

Jasta woke well before her alarm. In reality she wasn’t sure she’d actually slept. Who could sleep when Freedom Morning was so close?

Jasta shoved out of her bunk and slipped into the bathing chamber to prepare for the day. She rushed carefully through her preparations. She wanted to look her best when she dreamt back on this day.

At her first stop in engineering, she found grinning crew members, sparkling equipment, and enough data to confirm that Freedom Morning was a go.

The air in Esperanza was now completely Jardin’s air. Terran air was left far behind.

In medical, she confirmed there were no longer ill effects from the new combination of hydrogen, nitrogen, and what their scientists called jardigen. A molecule never seen back on Terra. At least from the records she had. Records from seven generations ago.

Hard to even imagine the changes in knowledge over that time frame. Leaving behind a burning husk of a planet in search of a future.

A future about to be realized.

Jasta checked in several more sections before heading to the gallery. The largest room on Esperanza was filled with her people. Not everyone fit, but she knew the others were watching from the screens. She doubted even one was asleep.

Jasta moved to the front of the room and grinned at the spontaneous round of applause.

“We’re here. We’re ready. This morning will begin a new chapter in humanity’s tale. We’ve got things to prove. We’ve been given a second chance. A second planet. We’ve all pledged to ensure we don’t harm this one. We’ve studied, we’ve learned.”

Her voice trembled and Jasta took in a deep breath before beginning again.

“We’ve read about wind and weather. We’ve seen vids of mountains and seas. We’ve heard the calls of fauna and smelled the scents of flora, but from a distance. Today, we experience all of those in a new way. In the best possible way. On Jardin, our new home.”

A cheer resounded through the room. Jasta blinked away the tears of pride in these people she loved.

The gallery rang as the people echoed her words. The promise they’d pledged every morning of their lives.

Jasta led the way to the nearest exit and for the first time in seven generations, the door opened.

Jasta tried to keep to a sedate pace, but joy and hope sent her into a run within only a few steps. She whooped and threw her arms to the sky.

Freedom Morning was their chance.

And they weren’t going to screw it up. 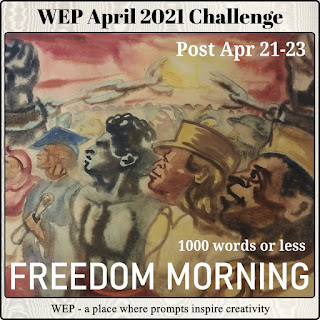 The above story is part of the WEP Challenge.

Have you participated in the Challenge before? It's always fun and productive. Not only is it good to flex those short story muscles, the real bonus is reading all of the amazing stories springing from a single prompt. Follow the link to read more!