I've had a really good run of luck this summer. I've won several prizes from the blogs of fellow writers. It's such a thrill to come home & find out I've won a prize, and then even more exciting when the prize arrives at my house. Definitely a great way to brighten up a busy June, July & August! I thought I'd share pics of my winnings - not to drive you crazy with envy - but to point you in the direction of some very generous and fabulous bloggers. Check out their links - these are some mighty fine people! 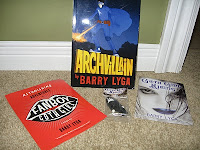 From Shannon Whitney Messenger over at Ramblings of a Wannabe Scribe, I received a signed ARC of Archvillain by Barry Lyga & some assorted Barry Lyga swag. AWESOME! My kids at school are going to love this book! If I let them get their hands on it that is... :) 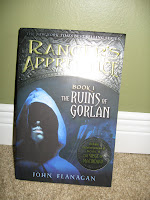 Next from Courtney over at Southern Princess sent me a book from the Book Depository - just because she was happy Elena Johnson got herself a book deal! What a sweetie! I chose The Ruins of Gorlon - the first in the Ranger's Apprentice series. This one will be a great read aloud for my classroom. 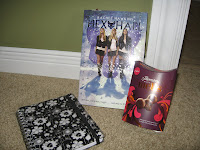 Then Lindsay (aka Isabella) at Adventures in Writing had a 100 followers contest. I won that too! The lovely Lindsay sent me a copy of Hex Hall, a great notebook and chocolate!! And, yes, the chocolate package is completely full in the photo, why do you ask?? :) 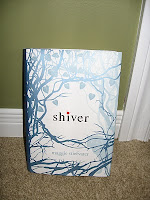 And that wasn't all! Martina & Marissa at Adventures in Children's Publishing had a terrific contest to find some Underappreciated YA novels. I was one of the winners there as well! They wrapped all the goodies in the cutest pink polka-dot gift bags. I won a copy of Shiver by Maggie Stiefvater! The ladies were kind enough to include blody lotion, balt salts and chocolate. The chocolate must have disappeared somehow - I can't seem to find it for the photo. Hmmm. That's odd. :)

The wonderful TK Richardson over at My Writing Masquerade had a blog party celebrating the release of her novel Return the Heart. I won a prize package filled with goodies: a bright yellow mini tote bag, Lindor truffles, breakfast coffee, a cupcake scented candle, a journal from World Market and a Root Beer scented pencil! 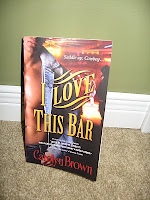 Then I won a copy of Carolyn Brown's I Love This Bar over at Mason Canyon's Thoughts in Progress. If you haven't visited Mason's site, you really need to hurry over asap. Mason has tons and tons of terrific give-aways. 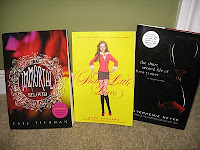 Then Renae Mercado at The Siren's Song had her first ever contest. The prizes were an ARC of Immortal Beloved, Pretty Little Liars and The Short Second Life of Bree Tanner. I won that one too!!! 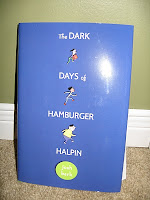 Elana Johnson had a contest to celebrate the fantabulous WriteOnCon. I won The Dark Days of Hamburger Halpin by Josh Berk - one of the presenters at the Conference!! Woohoo! :) Another great book for me and my students! 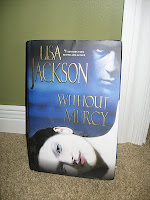 On the same day, Lisa Jackson's Without Mercy arrived in my mailbox. I won this one at Donna's Book Pub - she had an interview with Lisa & I was lucky enough to win the book! Awesome :)

That's Part 1. Yes there are more, but I won't drag this post on any longer. :) Remember to check out these fabulous bloggers - you won't regret it!

How's your luck been lately??
Posted by Jemi Fraser at 8:19 AM