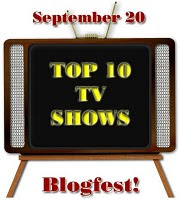 Alex Cavanaugh is doing it again! The Dirty Dozen Movie Blogfest was such a hit, he's hosting one now for Top Ten TV Shows. Again I couldn't resist. There are so many great TV shows I've enjoyed over the years. Top Ten though is HARD! After (not so) much internal debate, here we go...

11. My bonus pick. Okay it's not in the rules but I needed at least 1 more pic! Bablyon 5 was another close one, but for my bonus pic I'll go with Sliders - so many fun alternate dimensions.

10. Stargate Atlantis/SG1 - Love the gate! Love the blend of characters & emotions on these shows - so much great humour! And who doesn't love a good wraith or replicator?

9. X-Files. I didn't catch this show the first time around. I thought it would be too scary because I am a bit of a wimp. I have nightmares pretty much every night anyway, I didn't want to make them worse. But Scully & Mulder drew me in. There are so many great concepts in this show - so many possibilities. Love it!

8. American Idol & Canadian Idol. Yeah, I know - doesn't really match the rest of the shows on the list. But I love music - always have. I can't handle the audition rounds very well, but I love the Hollywood section where they have to work in groups. I love harmonies and when these kids do them well, it's amazing! :)
7. Bones - I'd read several of Kathy Reichs books and fallen in love with her characters Tempe and Ryan well before the TV show started. I like how the books and show have gone in slightly different directions but stay true to each other. Having the author involved probably makes that a little easier. :)
6. Star Trek: The Original Series. This series had to go on the list because it's the series that I think inspired me to write. One day I stumbled across the show in reruns. No one in my family enjoyed any kind of science fiction or fantasy so this was my first exposure. I got sucked in immediately. Loved Spock! Fascinating. :) I spent hours, usually at night when I should have been sleeping, creating scripts in my head. I kept at it until the settings, dialogue and blocking were all how I'd want them. I never wrote them down, but I probably created dozens of scripts over the years.
5. Star Trek TNG - The Next Generation really caught my imagination too. The cast was more modern and I thought the Data character was brilliant. Casting a comedian as a straight-faced, 'non'-emotional android was so smart!
4. Fringe - Fringe Science is so much fun. More alternate universes - more weird science and endless possibilities! Walter is awesome :)

2. Battlestar Gallactica. This remake was SO different from the original. Starbuck's a girl! I love the characters and the whole Cylon concept. Slave races will never be content to remain slaves forever.

1. Firefly - I actually didn't catch this when it was on TV either. Joss Whedon is a master. This show is set in the future in space, but it's more like the Wild West frontier. Okay, that sounds cheesy. It's actually brilliant and well worth a watch!
So, there you go. Definitely skewed towards the sci-fi end of the realm. Gotta thank my science-fiction-hating family for that one. We only had one TV for most of my growing up years, but I always got to watch Star Trek - although everyone else always found things they wanted to do elsewhere. It was great!
Thanks Alex! Make sure you check out his site :) (I've got meetings after school today - but I'll try to get around to a lot of the posts in the evening!)
So, what's your #1, absolute favourite TV series of all-time?
Posted by Jemi Fraser at 7:00 AM