Woohoo!!! My crit buddy Calista Taylor is heading out on a new adventure. Under that name she's published an incredible steampunk craft book, 2 steampunk romances (Virdis & Devil on a Sparrow's Wing) and 2 grim reaper romances (JACK & For One Last Kiss). 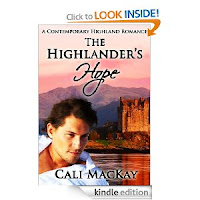 Now, she branching out into the world of contemporary romance under the name Cali MacKay. Her first novel is called The Highlander's Hope and it's up for FREE!

When Dr. Catriona Ross discovers clues to a long lost highland treasure, her only hope of finding the jewels is to obtain the help of Scotland's most eligible bachelor and playboy, Iain MacCraigh.
​
Iain can't believe his luck when he finds out the jewels are hidden away somewhere on his land-- and it doesn't hurt that the historian looking for them has curves to go with her smarts. With his brother betting the family fortune, this is the life line he desperately needs.
​
The odds are against them, and with word getting out about the jewels, they're not the only ones on the hunt. Time's running out, but can they learn to trust each other, or will they lose the jewels and true love in the process? 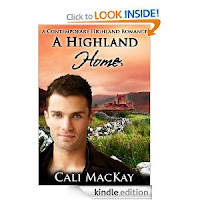 Sounds great doesn't it? And I can totally vouch for it! A sexy highlander, a smart & courageous historian & an elusive treasure - all kinds of awesome!

Rowan Campbell is desperate for answers. She’s lived her life without knowing a thing about her father, her mother refused to speak of him, even on her deathbed. With her cheating fiancé gone and no one else in her life, Rowan moves to her mother’s hometown in Scotland, determined to find the father she’s never known.

When Angus Macleod agrees to help a family friend move to Scotland from the States, the last thing he expects is to fall hard for the fiery redhead, who makes him rethink his bachelor ways. Looking for any excuse to spend time with Rowan, he’s more than happy to help her find her father, even if she’s skittish about committing to anything serious. But when Angus discovers Rowan’s mother left Scotland pregnant and terrified, he wonders how dangerous Rowan’s quest might be. Before long, Angus finds himself hindering rather than helping, despite knowing his actions could ruin any chance he has for happiness.

With Rowan closing in on her father’s identity, will Angus be able to keep her from harm? And will she ever forgive him for standing in her way?

So, pop off and try out Cali's latest stories - I hope you'll love them as much as I do!
Isn't it great when you get to celebrate a critique buddy's success? :)