The talented and generous Ninja Captain Alex J. Cavanaugh is releasing the 3rd and final book in his Cassa series this week. IT. IS. AWESOME! Alex had a great idea to celebrate his release - he let us all ask our own questions of him. Here's mine:
Why did you decide to have such big time jumps in between each of the books & would you consider filling in the blanks?
The twenty year jumps served several purposes.
I wanted to tackle something totally different in Byron’s life each time. At every stage of our 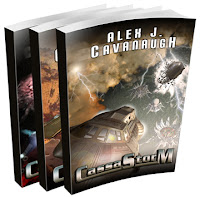 life, we face different challenges. There are some situations Byron never would’ve encountered as a young man in his twenties.
I wanted to show maturation of the character, from cocky and rebellious to mature and responsible to wise and commanding.
With twenty year jumps, the secondary characters change a lot. Readers get to meet a new batch of characters every time.
Finally, life just isn’t that exciting all the time for most of us. Despite Byron’s profession, I figured three major events spread over his life was enough.
And I’ve thought about filling in the blanks, but not sure I’d want to go back as much as go forward.
CassaStorm
By Alex J Cavanaugh
From the Amazon Best Selling Series!
A storm gathers across the galaxy…

Commanding the Cassan base on Tgren, Byron thought he’d put the days of battle behind him. As a galaxy-wide war encroaches upon the desert planet, Byron’s ideal life is threatened and he’s caught between the Tgrens and the Cassans.
After enemy ships attack the desert planet, Byron discovers another battle within his own family. The declaration of war between all ten races triggers nightmares in his son, threatening to destroy the boy’s mind.
Meanwhile the ancient alien ship is transmitting a code that might signal the end of all life in the galaxy. And the mysterious probe that almost destroyed Tgren twenty years ago could return. As his world begins to crumble, Byron suspects a connection. The storm is about to break, and Byron is caught in the middle…
“CassaStorM is a touching and mesmerizing space opera full of action and emotion with strong characters and a cosmic mystery.” – Edi’s Book Lighhouse


“…mesmerizing story of survival, personal sacrifice, tolerance, and compassion. It’s a rare jewel that successfully utilizes both character and plot to tell a story of such immense scope and intimate passion…” - Nancy S. Thompson, author of The Mistaken

"An exciting, nail-biting read which sweeps the reader off on adventures in another galaxy."
- Nicua Shamira, Terraverum

Alex J. Cavanaugh has a Bachelor of Fine Arts degree and works in web design and graphics. He is experienced in technical editing and worked with an adult literacy program for several years. A fan of all things science fiction, his interests range from books and movies to music and games. Online he is the Ninja Captain and founder of the Insecure Writer’s Support Group. The author of the Amazon bestsellers, CassaStar and CassaFire, he lives in the Carolinas with his wife.
Website       Twitter       Goodreads
Have you read Alex's series? If you haven't you're missing out - and CassaStorm is an awesome wrap up! Have you ever tried a time jump between stories?
Posted by Jemi Fraser at 1:00 AM