Thanks to the WEP judges for the Encouragement award for Tremors!! 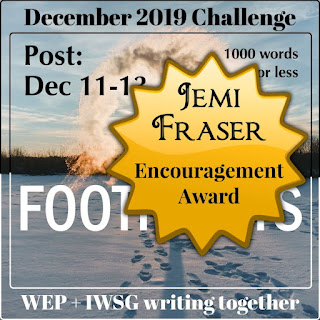 Calla eased over the edge of the canyon once the ground tremor passed. Maybe today she would find some evidence of animal life on this planet.

So far, nothing. Not a beat of wings nor a roar from a throat. Not a scratch on a tree to mark territory, not a bone or a carcass. Not even a footprint or a piece of scat.

In her years as Pathfinder’s senior biologist, she’d never seen a planet like it.

Vegetation flourished on the sides of this canyon that looked like it had been carved in ancient times.

The whole planet was nothing but giant hole after giant hole. Some of these holes were full of vegetation and the botanists couldn’t contain their glee every time they found a new species. Some canyons were dry as Terran deserts while still others had barely any vegetation and looked like they’d been created the day before.

She was going to be stuck on this planet with absolutely nothing to do at this rate. They were scheduled for a yearlong stretch if they found anything interesting. And they had.

Calla used the trunk of one of the tougher-looking plants to steady herself when the rocks beneath her feet tumbled away during another tremor. She moved along the ridge until she spotted an easier way down.

All this vegetation needed water and she was hoping to find a pond at the bottom. That might be her Terran brain in action again. Not all life required water. And she might have a year to catch up reading all about the other types of life if she didn’t find anything else to study.

The vegetation thinned to her right, so she moved that way and managed an easy trek to the canyon floor. If there was a pond or stream, it would likely be in the lowest portion.

Maybe she’d find evidence of animal life there. Even fossilized remains would be a thrill.

A few hours later, she’d found nothing but frustration.

The only thing different from the last few days was that the tremors were increasing in intensity and duration. The seismologists would be just as thrilled as the botanists.

After finding no sign of animal life near the only water source she’d spotted, Calla started back up the canyon. The first sun was setting and soon it would be too dark to find anything.

The tremors continued to increase and she found herself following the rhythmic pattern as she ascended.

Rocks and smaller pieces of vegetation slipped under her feet when she moved, and she had to slow her pace so she didn’t tumble to the bottom. When she scrambled over the edge, she threw herself to the ground and decided she needed to get in better shape.

A wild screech snatched the breath from her lungs and nearly deafened her. She searched the area for the cause.

The sky darkened and Calla looked up to find that it wasn’t clouds or vegetation blocking the setting suns.

The source of the screech was all the proof she needed that this planet had animal life after all.

Long lizard-like legs galloped toward her at an incredible pace. Upper arms flailed. Giant jaws opened and closed as shriek after shriek split the air and froze Calla in place.

At this distance, the size of the beast was impossible to gauge, but larger than anything on any planet humans had visited. Larger than Pathfinder. Maybe larger than five Pathfinders.

The rhythmic tremors continued as each foot crashed to earth, sending vegetation and dirt flying in all directions as it flattened whatever was in its path.

The creature raced closer, making dents in the earth and Calla looked back at the canyon she’d been surveying in horror.

It wasn’t a canyon after all. None of them were canyons.

This story is part of the WEP/IWSG December Challenge. Check out the link and enjoy the other stories. It's always fun to see the variety of stories that spring from one prompt. And the talent is stellar!! 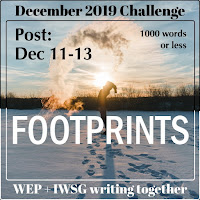 How about you? Any important footprints in your life?

I probably won't post until the New Year, so I hope those of you who celebrate enjoy a wonderful holiday season with your families.
Spread some love and kindness and joy!!!