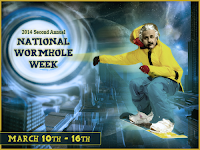 For this year's festivities, participants are asked to look at both sides of science and technology. How has one aspect enhanced humanity and how has another (or the same) caused us trouble.

So many to choose from!!!

One of my favourite technological advances is portable music! From the good old Walkman back in the day to the numerous iPod versions, it has made life better. Sure I could be talking about vaccines and adaptive devices and artificial limbs and other serious topics, but I LOVE having my music with me. It makes working out livable and walking so much more enjoyable! On a more serious side, the technology has also made it SO much easier for kids who live kind of on the fringes at lunches and recesses. Some kids find it incredibly difficult to find friends to hang out with at these times and the technology has helped them. Not only do they appear busy and like they're choosing to be alone but they have something to focus on other than their solitude. That's a huge plus in my book!

On the down side, I generally find it's not the technology or the science itself that causes humankind problems, but the humans who choose to abuse it. There seems to be a need to turn almost everything into a weapon of some kind. Chemical warfare and biological agents are some of the most terrifying we've managed to create. The most insidious are probably the recreational drugs that cause so much damage. While some may not agree that these are weapons, I would show as evidence the kids with the damaged psyches, injured brains & bodies, and irreparably broken hearts I've met over the years. Weapons indeed.

For other entries in the blogfest, click on the 3 links at the top of this post. Good luck to Stephen with Escalation - his 3rd book in the Chase Manhatten series! You'll love his use of wormholes in these books!!

What's your favourite or least favourite technological advance?
Posted by Jemi Fraser at 1:00 AM