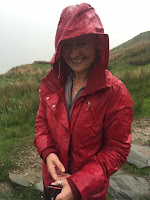 When I’m reading a book, I want to get to know the characters. If it’s well written, with a good story line to keep me hooked, they will get inside my head. One way I “see” them and begin to understand them, is from the way they dress. I won’t have much thought for a sophisticated business woman who isn’t wearing a suit. I’ll have more respect for her if it’s one by Ralph Lauren, for example.
And that’s the way I work in my writing. My characters are defined by their actions and words, but I also like to dress them appropriately. I will often scour magazines, photo websites, even high street advertising boards to find images that fit my characters.
Let me give you some of examples.
In Guiltless the hero is a photographer who doesn’t earn very much. This is quite an important factor in his make-up. Byron wears jeans and T shirts, drives an old Nissan truck and lives in a rundown farmhouse. This is one of my favourite images I have for him:

There is a scene in the book where Byron appears in “a black suit, grey waistcoat and stark white shirt with a narrow black tie.” This attire is totally out of character with the man Lauren, the heroine, has come to know. There is a reason he has to dress like this so I go into detail about his clothes, underlying their significance.
I have great fun “dressing” Lauren, the CEO of her own fashion house, who also wants to model their next range of lingerie herself. Here is an image I have on my website:

The high heels are important – Lauren is only five feet four inches and she wants to be taller. She is very comfortable wearing four-inch heels.
The images help me to use words so the reader can visualise the characters. Of course, if someone was ever to make a film of my book, my idea may not quite work. Anyone who has read Jack Reacher and watched one of his films will know what I’m talking about.

I also use visuals on social media. It’s a great way to connect with an audience and try to promote your book without splashing the cover everywhere all of the time. When you’re character is well developed and has been “living” inside you for a long time, it’s hard to pick out photos that make a good match. One way I avoid this is to use silhouettes, but I don’t want to over-use them. In some instances I take a photograph and cut the head off. It’s not as drastic as it sounds – the photo of Byron above is a good example.
I was lucky with the protagonist of my third book, Keeping You, which will be published end 2017,early 2018. When the reader meets this guy, Lawrence, he is quite the opposite of Byron. Lawrence Bane only wears designer labels. The reason for that lies in a damaged past when he never had control of his life. I drop names such as Hugo Boss, Calvin Klein and Karl Lagerfeld into my descriptions as often as he drops his pants! But there comes a time when Lawrence has to revert to bargain clothes. I have great fun contrasting descriptions, and again imagery helps me.
For example: Suit man

My aim is to describe clothing to help both explain and determine the scene. In this example, one scene is about a proud man, protective of his privacy and his past. The other is a man filled with shame as he is forced, once more, to become the man he used to be.

In this article I stick to clothing, but my laptop is full of images of buildings, furniture, bouquets, cars… I could go on. Let me know what helps you to “tell” your story.

***
Mollie Blake is a published author of contemporary romance. A lover of reading sexy stories, Mollie decided to go one step further and write her own. Her romances are filled with danger and peppered with hot sexy scenes. She is a member of International Thriller Writers and UK Romantic Novelists Association.
Connect with her on the web:
Website     Facebook      Twitter       Author Page

Managing Director of her own successful fashion house, Lauren Chandler should have everything going for her. But at twenty-nine, she finds herself single again, and bored. Seeking a new challenge in her life, under the guise of saving her company money, Lauren embarks on a mission to model their latest range of lingerie herself. She just needs a photographer. When Byron Lord makes an unusual proposal, Lauren is adamant he won’t win the contract.

Co-owner of Broadway Studios, Byron Lord is determined to provide job security to his off-beat workforce, and he needs Lauren Chandler’s help to do so. Byron may have underestimated how far Lauren would be prepared to go. He had definitely underestimated how much she would demand of him.

And with an ultimatum of her own, Lauren gets far more than she bargained for.
Buy links:
Amazon Kindle
Amazon Paperback
Amazon UK
Enter to win signed copies on Goodreads!

***
Wow! I'm NOT a visual person so this is fascinating to me! I can't even tell you the hair colours of the MCs in the new book I'm attempting to plot! Very cool ideas here - and they totally work.

How about you? Are you a visual person? Do you use clothes in powerful ways like Mollie?