Reaching For Roots (Bloo Moose #7) is out today!! 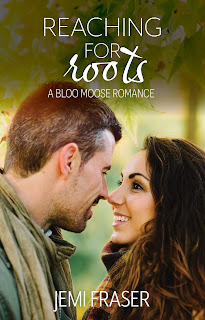 Cartoonist Emmy Rivera loves everything about the quirky town of Bloo Moose, but that doesn’t mean she’s ready to put down roots. That’s never worked out for her in the past.

Undercover agent Ryan Ward is always on the move, taking down criminal masterminds like the one who caused his dad’s death.

Ryan doesn’t expect the only connection to his latest target to be a sweet and sexy cartoonist who makes him want to rethink everything.

Putting down roots might not be so bad. If the lies don’t destroy them first.

Emmy and Ryan's story has been running around in my head for a long time. I wasn't sure how they were going to fix all of the troubles they faced, but, they figured it out for me - with a little help from Ryan's mom and some friends with an interesting competition.

If you're looking for a fun read with a secret identity, silly moose puns, and a dose of suspense mixed in, I think you'll enjoy Reaching For Roots!

How about you? Are you a fun of silly puns? Do you like stories with an undercover agent involved? Anyone else have stories running around in their head for a long time?